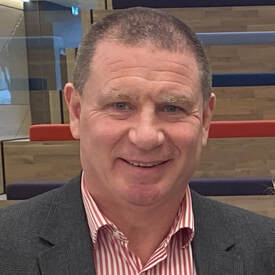 President - Russell Burke
Welcome to the CBC Monkstown Park Past Pupils Union website.
The mission of the Past Pupils Union (PPU) is to maximise effective and lifelong engagement of past pupils in supporting each other and the College. While our time in CBC, at a hugely formative time in our lives, is extremely important, it does not end there. Relationships that begin in CBC with fellow pupils, staff, other family members, past-pupils and the wider CBC community continue to develop and grow for many years after that final Leaving Certificate paper has been completed, or not completed in the case of the Class of 2020 who were not afforded that opportunity as a consequence of the Covid-19 pandemic.
For more than six decades now, past pupils of CBC Monkstown have interacted in third level education, on the sporting field, in business, in the local community, as parents of current pupils, as expatriates and, indeed, many as teaching staff in the college itself. With social media and modern technology, finding former classmates and keeping in touch has never been easier. To help deliver on the PPU’s mission, it organises events and provides a networking body for all pupils of CBC, past and present. The executive committee of the Past Pupils Union organises events each year which afford the opportunity for members of the extended CBC community to come together. Unfortunately, like with many other aspects of our lives, current Covid-19 related restrictions mean many of these are currently curtailed.
The PPU typically facilitates class reunions, stages an annual golf classic, participates in and contributes to a number of College activities and donates regularly to local and, on occasion, not so local charities. It also supports many school activities such as presenting a special ‘SCT’ tie to the members of each year’s senior cup rugby panel, presenting all sixth-year pupils, at their graduation dinner, with a certificate acknowledging five years of honorary membership of the PPU and holding five-a-side soccer and seven-a-side rugby events.
The PPU also aims to hold a fairly major event every few years. In 2016 the PPU held a Celebrating ’76 event which marked the 40th anniversary of winning the Leinster Senior Cup.  In 2019 it hosted “The Gathering”, an event at which two guest alumni speakers, Frank McCabe and Johnny Feehan delivered key note speeches and the PPU presented three past pupils with its Outstanding Achievement Award.
In 2020, literally days before the first Covid-19 enforced lock down, the PPU was very proud to have been able to organise a fundraising table quiz to help raise funds for former pupil Sean Drummond who suffered traumatic brain injuries following an accident in London in 2019 and is still in hospital there, participating in a programme of intensive rehabilitation.  This obviously puts a massive burden, especially financially, on Sean’s family.  Having set a target of €5,000 the event ultimately raised in excess of €11,000 which the PPU hopes will help a bit.  The generosity of both the sponsors of prizes and auction items as well as all the participants on the night was quite extraordinary and is a great illustration of how strong that ‘CBC factor’ can be.
Given the current restrictions, the PPU recognises that many ‘normal’ activities cannot take place.  However, if any class wants to organise a ‘virtual’ reunion in 2021, as the PPU cannot offer its customary wine reception in the College, what it will do is, if the class would like to nominate a particular charity, the PPU will donate €15 for each participant that is a member of the PPU, including and especially new joiners.
The PPU has always had great support from the College in all its activities and this support continues under current principal, Mr. Gerry Duffy, to whom, along with many other staff members, we are very grateful.  The whole is greater than the sum of the parts and so we encourage all past pupils to become and remain members of their PPU to further its mission.
The message of the PPU is “CBC Matters”. The PPU strives to ensure that CBC matters, and continues to matter, to every past pupil wherever their journey in life takes them.
Russell Burke (1978), President​
Details on how to join the PPU are available on the Membership Information page.  To find out more, or if you have any suggestions or queries, please email me at cbcppu@gmail.com
​