​Paddy O’Donoghue – For Service to Irish Rugby
​
Paddy O'Donoghue  was educated at CBC Monkstown Park and was a former Irish Rugby International prop who also represented the Barbarians and was an administrator in Irish rugby. He played his club rugby for Bective Rangers, winning the Leinster Club Senior Cup in 1955 and 1956. During this time the club was notable for Welsh international Cliff Morgan who lined out at fly half. He also played with current IRFU President and fellow CBC Monkstown Park past pupil, John Lyons and with renowned internationals Maurice Mortell, Fergus Keogh, Gerry Hardy, Paddy Costello and Bill Mulcahy.
He won eleven caps for Ireland between 1955 and 1958, making his debut versus France. Following his retirement, he coached at various levels including his former club and CBC Monkstown’s 1976 Leinster Senior Cup winning team. He served as both Treasurer and Secretary of the IRFU including being in charge of organising the Rugby world cup in Ireland in 1991.
John O’Shea – For Service to Humanitarian Aid 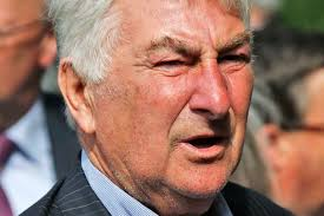 John O'Shea - For Service to Humanitarian Aid
​
John O'Shea was born in Co. Limerick and attended CBC Monkstown Park before going on to study Economics, English and Philosophy at University College Dublin. John subsequently went on to have a career as a sports journalist in the Evening Press for many years. Deeply moved by the plight of street children he encountered on a trip to Kolkata (Calcutta), John O’Shea founded GOAL in 1977, and throughout the 43 years since its foundation, GOAL has responded to almost all of the world’s major humanitarian crises since, working with vulnerable communities in more than 60 countries. In 2019 alone GOAL reached more than six million people in need in some of the world’s poorest and most vulnerable countries. The tennis superstars John McEnroe, Pat Cash and Irish rugby international, Gordon D'Arcy, are amongst many sports stars to have become "Goalies"(volunteers). GOAL continues to help change the lives of communities experiencing crises and extreme poverty through nutrition, health, livelihoods and emergency response programmes. 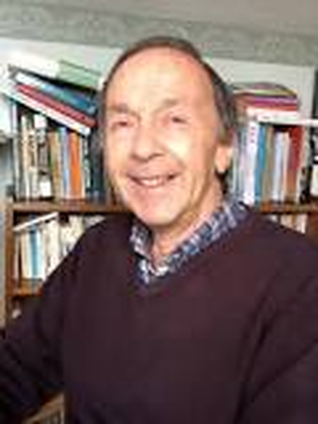 Bernard Farrell – For Service to The Arts

Bernard Farrell was born in Sandycove in County Dublin in 1941. He attended CBC Monkstown Park and went on to become recognised as one of Ireland’s leading dramatists. His many awards for his contemporary comedies include The Rooney Prize for Literature in 1980 and The Sunday Tribune Comedy of the year Award for 'Forty-Four Sycamore' in 1992. In 1998 'Kevin's Bed' was nominated as best Irish Play in the Irish Times/ESB Theatre Awards. He was Writer-In-Association at the Abbey Theatre in 1996/97 and has also served on the Abbey Theatre's Advisory Council and as Director of the Abbey Board. In 2014 he was presented with The John B. Keane Lifetime Achievement Award in association with Mercier Press. His work has been performed in almost all of Ireland's leading theatres, and has been produced overseas in the USA, Canada, the UK, Belgium, Holland, Germany, New Zealand and Australia. He has written a number of radio plays, two of which ('The Year of Jimmy Somers' and 'The Final Whistle') went on to represent Ireland at the Prix Italia in 1987 and 1992 respectively. He has also written for television, including for the long-running RTÉ series 'Glenroe'. 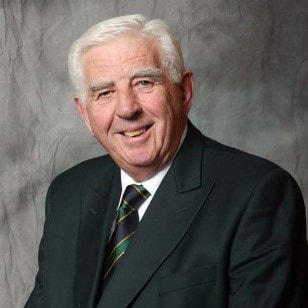 John Lyons – For Service to Irish & International Rugby
John Lyons was educated at CBC Monkstown Park and went on to study accountancy. He joined Bective Rangers Rugby Club in 1956 and won medals in minor and junior ranks before establishing himself on the Bective senior team in 1958. He won a Leinster Senior Cup medal as an up-and-coming wing forward in 1962 during a ‘golden era’ for the club. A serious knee injury in 1963 ended a promising career, following which he commenced an administrative career at his club, the Leinster Branch and the IRFU.
He is a former Hon. Treasurer of the club, as well as being President in 1990. John Lyons was also Honorary Treasurer of the IRFU between 1996 and 2007, and so he was the first treasurer in the professional era faced with a challenge never previously encountered by his predecessors. He was elected to the office of 120th President of the IRFU on June 27th 2008 and is acclaimed to have served the IRFU and Irish rugby with distinction. 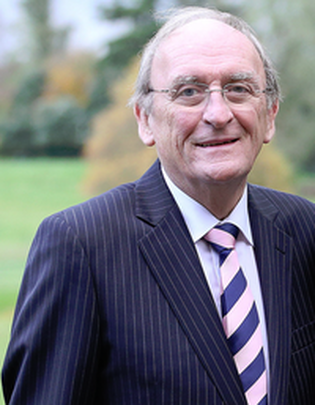 Sean Barrett – For Service to the State

Seán Barrett was born on 9th August 1944 and attended CBC Monkstown Park before going on to University College Dublin. He initially became a he was a partner in a successful Dublin-based insurance brokerage firm (Barrett, Hegarty Moloney, established in 1980). A keen fan of horse-racing,[4] in 1987, he also established Seán Barrett Bloodstock Insurances Ltd. He subsequently moved in the political sphere: He first became involved in local politics, serving on Dublin County Council from 1974 until 1982.
He was a member of Dublin County Council between 1991 and 1993 and then served as a member of the Dún Laoghaire-Rathdown County Council until 1995. He was subsequently elected as a TD for the Dún Laoghaire constituency from 1981 to 2002 and again from 2007 to 2020. He is a former Irish Fine Gael politician who served as Ceann Comhairle of Dáil Éireann from 2011 to 2016, Minister for Defence and Minister for the Marine from 1995 to 1997, Government Chief Whip from 1982 to 1986 and 1994 to 1995. 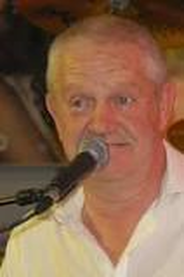 John Keogh – For Service to the Arts


John Keogh attended CBC Monkstown Park before going on to become an Irish musician, producer, director and television personality. In the 1960s he attracted considerable fame in Ireland for being the lead singer of the showband, The Greenbeats before establishing himself as a producer at RTÉ.
The shows on RTÉ which he produced include The Live Mike and Bull Island. He has also appeared in a number of RTÉ shows including The Lyrics Board where he was a team captain for a season and Killinaskully. He once took part in the 1965 Irish National Song Festival with the song "Yesterday's Dream" finishing 3rd. 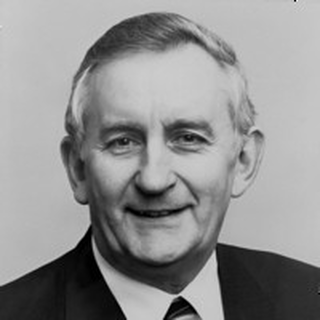 Frank McCabe grew up in Ballybay, County Monaghan and after studying in CBC Monkstown Park went on to graduate with a BE in Mechanical and Electrical Engineering from University College Dublin and a Master of Science Degree from Clarkson University, U.S. His first employer was STAL in Sweden. GE subsequently recruited him to the position of Director of Manufacturing and Engineering Operations of ECCO, a green fields plant in Dundalk to produce Leadership Semiconductor Products. He built up an all local Management and Technology team - to a total employment of 1500 employees. In 1970 he was appointed Managing Director in EI Shannon another GE subsidiary which still produces leading semiconductors and consumer products for select world markets. He initiated an R&D centre in EI, a first in the HI TECH sector in Ireland. In 1979 he was appointed as Managing Director of Digital Equipment European Manufacturing and Technology Operations. DEC was the second largest Computer Company in the world.
In 1994 he was appointed as V.P. of Manufacturing and Technology for INTEL and GM for Ireland and USA East coast operations. This has since grown in Ireland to an investment of over $12 billion and INTEL is now one of the largest employers in the state and has contributed hugely to the development of the computer related industry in Ireland. In terms of public service, he held roles as Chairman of SFADCO and Vice Chairman of Science Foundation, Board Member IDA among other roles. He was also a Board Member of CITIBANK Europe for nine years. He also received Honorary Doctorates from NUI and DIT. 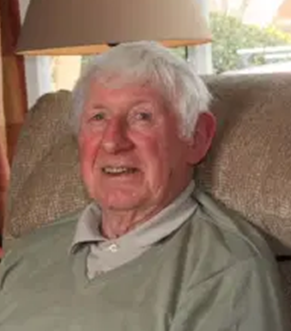 Patrick Joseph Casey was born in Dublin on August 4, 1941. He began playing rugby in C.B.C. Monkstown Park before graduating to study in University College Dublin. He joined Lansdowne Rugby Football Club, where he was elected to the club’s Hall of Fame, and subsequently represented Leinster at interprovincial level. He made his international debut for Ireland on January 16, 1963 against France. He was capped 12 times, scoring three tries for Ireland at wing playing alongside the fellow Irish rugby greats Mike Gibson, Tony O'Reilly, Tom Kiernan and Willie John McBride.
He scored what is regarded as one of the greatest tries in Irish rugby history against England in an 18–5 rout at Twickenham in 1964. A move begun by debutante fly half Mike Gibson in the Irish 22 was finished off by Casey under the posts. The game was also one of the first ever rugby games televised by RTÉ. He also scored a try for Leinster in the same year in a game closely fought game versus when they lost 11-8 to the All Blacks. 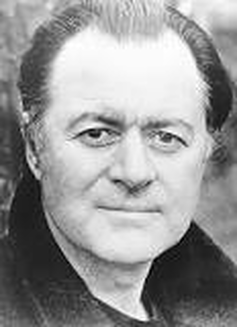 Des Cave – For Service to the Arts
Des graduated from CBC Monkstown Park in 1961. He first appeared on stage in roles in Gilbert and Sullivan operas in college before joining the National Academy of Allied Arts, Camden Street in 1961. He was accepted into the Abbey Theatre School of Acting in 1963 and was invited to join the company in the same year. Des’s career spans over 50 years and he has appeared in many roles on stage, TV and cinema acting alongside many acting greats and some of the world’s most acclaimed producers and directors.

His has appeared in many theatre productions including A Mid-Summer Night’s Dream, The Plough and the Stars, Dancing at Lughnasa, Macbeth, The Importance of Being Earnest and Borstal Boy. His TV series credits for RTE and BBC productions include Glenroe, The Plough and The Stars, Against All Odds and The Ambassador. His movie credits include Philadelphia Here I Come, The General and Veronica Guerin.

Joe Brady – For Service to Irish Rugby
1976 was a great year for CBC Monkstown Park rugby. Not only did CBC Monkstown Park win the Leinster senior cup but we also had a new senior international rugby player, Joe Brady who won 2 senior caps for Ireland. Joe played in the centre alongside two rugby greats, Mike Gibson and Tom Grace. His first match ended in a 13-12 victory against England in Twickenham on March 6th and his second game saw a 15-6 defeat to Scotland in Lansdowne Road two weeks later on March 20th. Joe also toured New Zealand and Fiji in 1976 during which Ireland lost narrowly to New Zealand 11-3 before beating Fiji 11-0. He also helped train the CBC Monkstown Parks’ 1976 Leinster schools’ senior cup winning team.
​ 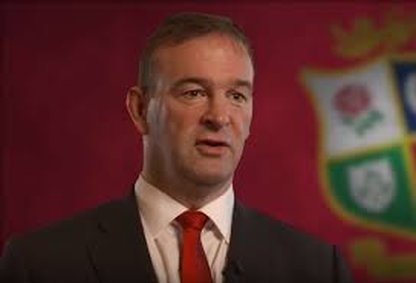 John Feehan was educated at CBC Monkstown Park and then in the College of Marketing and Design, and Trinity College Dublin. He graduated from TCD with a B.Sc. Management, and Computers in Education. He also received an advanced Diploma in Marketing techniques from the College of Marketing.  John played as a tight-head prop for various teams including Trinity College, Old Belvedere, Old Wesley, the Irish U21’s, Irish Universities, and Leinster.

After working in senior roles in industry John was appointed as C.E.O. of three incredible rugby properties from 2002 to 2018. He was in charge of the Six Nations championships for sixteen years, for four Lions tours, and for five PRO 12 (now 14) seasons. Somewhat uniquely he directly oversaw huge growth in the finances, brand development, and in the overall popularity of the game in not only top-class international rugby, but also the elite professional club game.  ​